So maybe you’ve recently started watching UFC fights, and you noticed something many fighters have. And that’s a nickname. When the fighter gets announced into the Octagon, the announcer will say some of the fighter’s attributes, and ends it with the fighter’s name, which usually has a nickname attached to it.

But why is that? Why do UFC fighters have nicknames?

UFC fighters have nicknames as a quick way to describe themselves to the fans. A nickname also helps a fighter stand out, helping their brand, and allowing them to become more recognizable among the fans, the press, and other fighters.

But there is a lot more to a fighter’s nickname than just being more recognizable. In the rest of this post, I am going to cover other questions surrounding nicknames in combat sports.

The Origin Of Nicknames In Combat Sports

Nicknames are synonymous with combat sports. In pro wrestling, boxing, and MMA, the majority of competitors will have some type of nickname attached to them.

Even in the mid-1800s, nicknames were a part of boxing, as noted by John L. Sullivan’s nickname, “The Boston Strong Boy”.

Nicknames are mostly a construct of the fans, as they want an easy and memorable name to recognize certain fighters. The history of nicknames starts in boxing, from which MMA has adopted many of its traditions.

From there, nicknames would continue, eventually also becoming a part of MMA. Whether it is chosen by the fighter, or a product of the fans, most fighters have some sort of moniker.

Nicknames Of Famous Fighters (And How They Got Them)

As mentioned earlier, not every fighter has a nickname, but the vast majority do. Here, I will list some of the most famous fighters and their corresponding nicknames, with a brief history on how they got them.

Conor McGregor has been a sensation among the fans since his introduction to the UFC. His fighting style, along with his brash commentary outside the cage, has led to many people admiring his work inside the Octagon.

McGregor’s nickname is “Notorious”, which is a very fitting name considering how well-known he is for his antics and pre-fight buildup. However, the name comes from McGregor’s youth, as he has always been notorious for causing trouble.

In an interview he did with Reebok, McGregor revealed that his nickname was given to him by his coach, John Kavanagh. In the interview he says, “I’m notorious for getting into a little bit of trouble, my coach called me that back in the day. He had me saved in the phone as trouble, and it just kind of stuck.”

McGregor has told several stories about being a troublesome youth, including the time when he first walked into John Kavanagh’s gym, fighting several of the gym members, until Kavanagh got him into a submission. This is one of the better nicknames in MMA, as it fits Conor well.

Along with being “The Notorious”, Conor has also dubbed himself “Mystic Mac” due to predicting the outcomes of his fights correctly, especially in the early part of his UFC career.

Jon Jones is the UFC’s light heavyweight champion, and is well-known for his long reign and impressive record. Inside the Octagon, Jones’ nickname is “Bones”, which was apparently given to him by his friends in high school.

In an interview with the New York Post, Jones said, “I played football and wrestled in high school. I stuck with wrestling because at 170 lbs, I was too small to do anything great on the defensive line. In fact, I was so tall and skinny, my friends called me ‘Bones’ so my nickname is a little tribute to my high school days.”

Considering both of Jones’ brothers play football in the NFL, he probably looks skinnier when compared to them. His “Bones” nickname is also very fitting for other reasons. Jon Jones incorporates a lot of elbows into his fighting style, which can also relate to his nickname.

Its definitely a lot better than his old nickname, Jon “Sexual Chocolate” Jones. Check out where Jones is announced with the name in the clip below.

Chan Sung Jung is a South Korean UFC fighter who has previously challenged for the featherweight title. He has an interesting nickname, and what’s more interesting, he prefers to be called by it (sometimes shortened to KZ by fans) instead of his real name.

Chan Sung Jung earned his nickname due to his fighting style, being able to take many shots and yet continue to walk down his opponent, almost like a zombie. His fighting style and his wicked cool nickname has drawn much attention from the fans.

When he returned to the UFC after his mandatory service with the South Korean military, he informed the UFC broadcast to refer to him as Korean Zombie, and not as Chan Sung Jung. His nickname can also be seen on the UFC’s fight clock, where his name would otherwise be.

His nickname is cool, accurately describes his style, and is very memorable. It is a big reason for why fans love The Korean Zombie.

So as you can see, there’s a lot that can be behind a nickname. The nicknames listed here are all meaningful, describe the fighter well, and are easy to remember.

So in short, UFC fights have nicknames in order to quickly describe themselves in a memorable way. It helps the UFC market the fighters, and it helps the fans relate to the fighter through the meaning in their nickname.

I hope this post answered your questions on nicknames in the UFC. If you enjoyed, consider checking out similar posts on the Fan Questions page. Thanks for reading!

How Many People Have Died In The UFC?

What Is The Length of an Average Boxing Match? 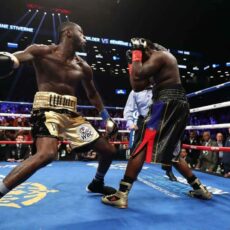 What Is A Haymaker Punch?