So chances are, you’re probably familiar with movie star and martial artist Chuck Norris. He is probably best known for his fight scene in Way Of The Dragon, where he faced off against another popular martial artist, Bruce Lee.

However, after seeing Chuck’s fight scenes, you may be left wondering about his martial arts background, the extent of his fighting skills, and how he attained those skills. So what martial arts does Chuck Norris know?

Chuck Norris is an expert in many different martial arts, holding black belts in Karate, Tang Soo Do, Taekwondo, Judo, and Brazilian Jiu-Jitsu. He has also studied styles such as Hapkido, Kenpo, and Arnis, and has even created his own martial art known as Chun Kuk Do.

In the rest of this post, I’m going to detail Chuck Norris’ martial arts journey, starting with his beginnings in Karate. We’ll look at how he got into each martial art, how proficient he is at each of them, and how he eventually incorporated them into Chun Kuk Do.

At the young age of 18 (in 1958), Chuck Norris’ martial arts journey began when he joined the U.S. Air Force as an Air Policeman. In 1960, he was relocated to Osan Air Base, in South Korea. Interestingly, this is where he gained the nickname “Chuck”, as his real name is Carlos. 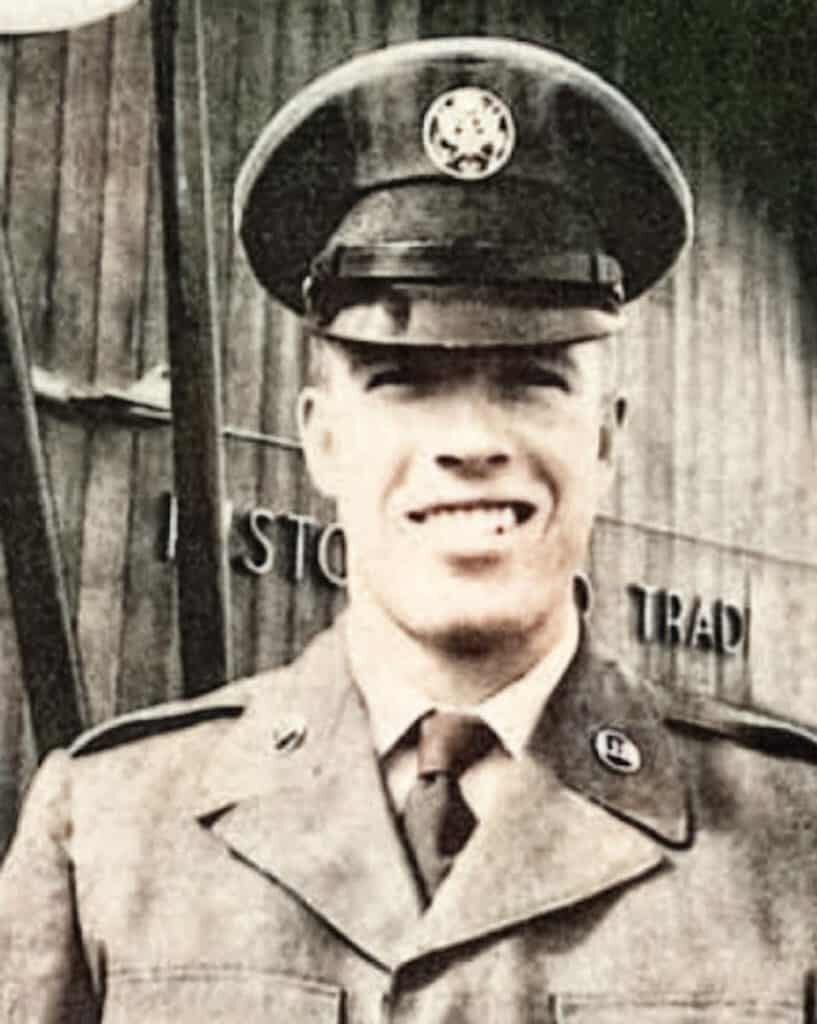 Here’s a young Chuck Norris after his arrival to South Korea.

A short time after arriving at the base, Chuck became interested in Judo, and took a class on the base. Unfortunately, Chuck would break his right shoulder only one week into the class, forcing him out of training for a while.

However, during this time off from Judo, he came to witness a Tang Soo Do class while taking a stroll. He was mesmerized by the grace and spinning kicks of the Korean martial artists, and wanted to be a part of it. Chuck’s Judo teacher introduced him to a Tang Soo Do instructor, and Chuck immersed himself in his training from that point on.

I’m going to cut into Chuck’s story from time to time to explain the various martial arts he studied. So for those of you who don’t know, Judo is a Japanese grappling art, focusing on throwing your opponents. The idea is to throw your opponent onto their back, giving you the advantage in a fight. 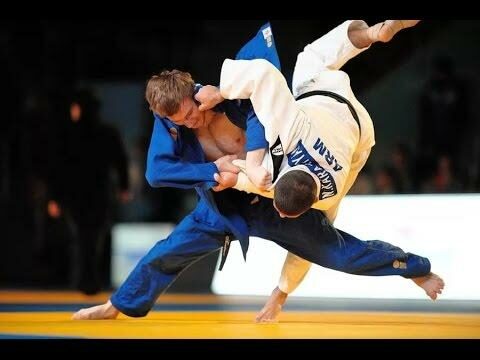 Judo focuses on learning to throw your opponent, which can make it dangerous, as it is very dynamic.

Given that many of Judo’s throws consist of flipping someone by grabbing their arm, it makes sense that Chuck injured his shoulder.

Tang Soo Do is a Korean martial art that is based on Karate. It is a striking martial art practiced through forms (similar to the kata in Karate) and light forms of sparring. The techniques themselves are very similar to Karate. Now that we know more about these martial arts, let’s get back to Chuck’s intense training regimen.

In an interview with the LA Times, Chuck spoke about his time at Osan Air Base, saying, “I was training in tang soo do four hours a day, from 6 in the evening until 10 at night, Monday through Friday, and then judo on Saturdays. Being a 19-year-old kid and not really athletic, it was tough.” 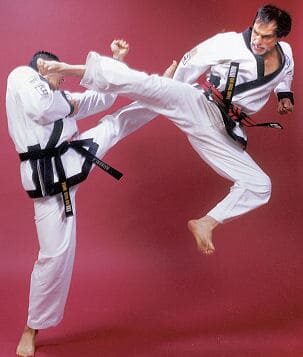 Tang Soo Do is very similar to Karate in its forms and techniques.

So for those people wondering what Chuck Norris’ base martial art is, the answer is Tang Soo Do. This would explain his proclivity for Karate-style techniques, as the two martial arts are very similar in style.

Upon his discharge from the Air Force in 1962, Chuck would continue to hone his Karate skills.

Subsequent to his military service, Chuck decided to open a martial arts gym in Torrance, California. However, Chuck had trouble recruiting new students to join his gym. In order to bring publicity to his gym, Chuck began performing exhibitions, and later began participating in martial arts competitions. 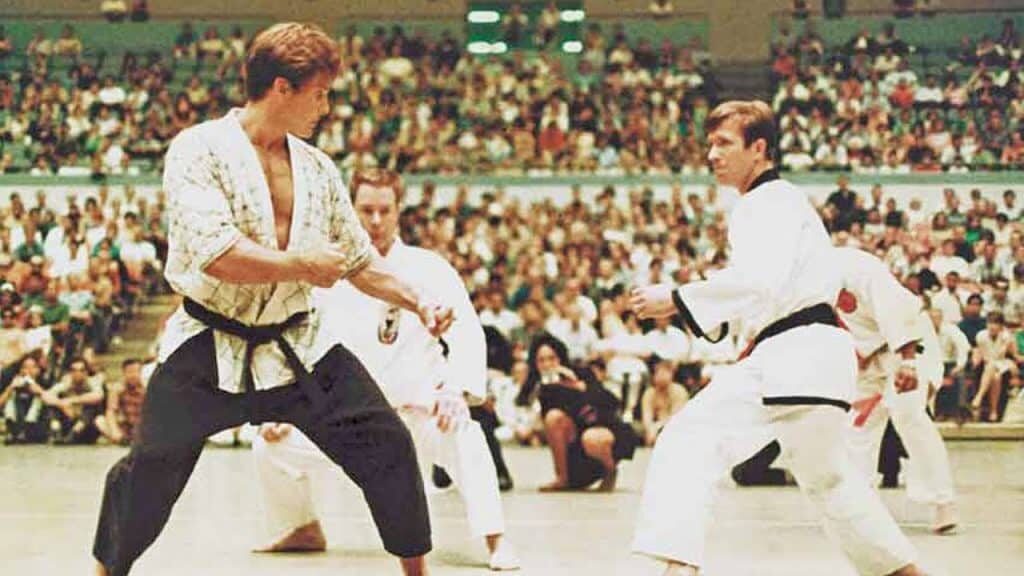 Here is Chuck Norris (right) at a Karate competition.

Chuck first participated in a Karate tournament in 1964, in Salt Lake City. It is known that he won his first two matches, but did not win the tournament.

Some sources say that Chuck had a rocky start to his competitive Karate career, although it is unclear if this is true. Such sources state that Chuck held losses to notable Karate practitioners, including Joe Lewis, Allan Steen, and Tony Tulleners. However, by 1966 Chuck had improved significantly, so much so that he won the Middleweight Karate title after beating Skipper Mullins. 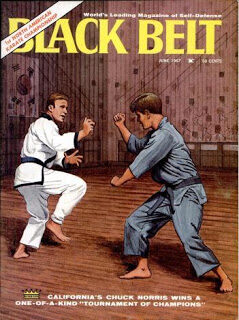 Chuck would later win the title of Grand Champion in June, 1967. After four victories (including a win over Joe Lewis) and only one loss, Chuck was crowned the Grand Champion, according to Black Belt Magazine.

Chuck would continue to compete in tournaments, winning and defending his titles along the way. Sometime before 1968, Chuck met Bruce Lee during a competition, and they developed a close relationship in working and training.

For most of his life, Chuck trained in mostly striking based arts that were similar to Karate, aside from his training in Judo. However, during a trip to Brazil in his mid-40s (in the 1980s), he discovered Brazilian Jiu-Jitsu after visiting several gyms in the area.

Eventually, Chuck ended up training with the Gracie family, who founded Brazilian Jiu-Jitsu. After returning to Los Angeles, Chuck continued to train Jiu-Jitsu, eventually becoming skilled at it. You can see Chuck talk about his introduction to Jiu-Jitsu in the video below.

He eventually continued his training with the Machado family, who are also considered Jiu-Jitsu royalty. It is unknown exactly when Chuck got his BJJ black belt. He can be seen in this video performing a Jiu-Jitsu demonstration along with Carlos Machado in 1992, clearly wearing a colored belt. However, it is unclear what color belt he is wearing, and could potentially even be wearing his Judo black belt.

Chuck Norris received his 3rd degree BJJ black belt from Jean Jacques Machado in 2015, at the age of 75. 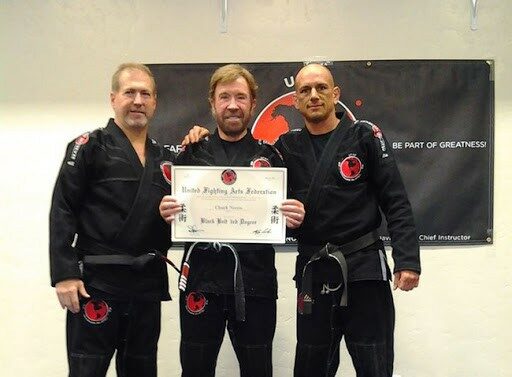 Although not a lot is known about Chuck’s Taekwondo ranking, it is known that he made history by becoming the first Westerner to ever attain an 8th-degree Taekwondo black belt, which he received in 1997.

And of course, he holds a 10th-degree black belt in Chun Kuk Do.

Chuck Norris had created his own style of fighting since the early 1970s, but it wasn’t officially named Chun Kuk Do until 1990.

Chuck’s martial art has been compared to Karate, as he has adapted it to be very similar in various ways. For example, Chun Kuk Do has traditional forms and stances, the same way Karate does.

As Chuck learned different martial arts throughout his life, he has incorporated these styles into Chun Kuk Do, making it an all-encompassing fighting style. 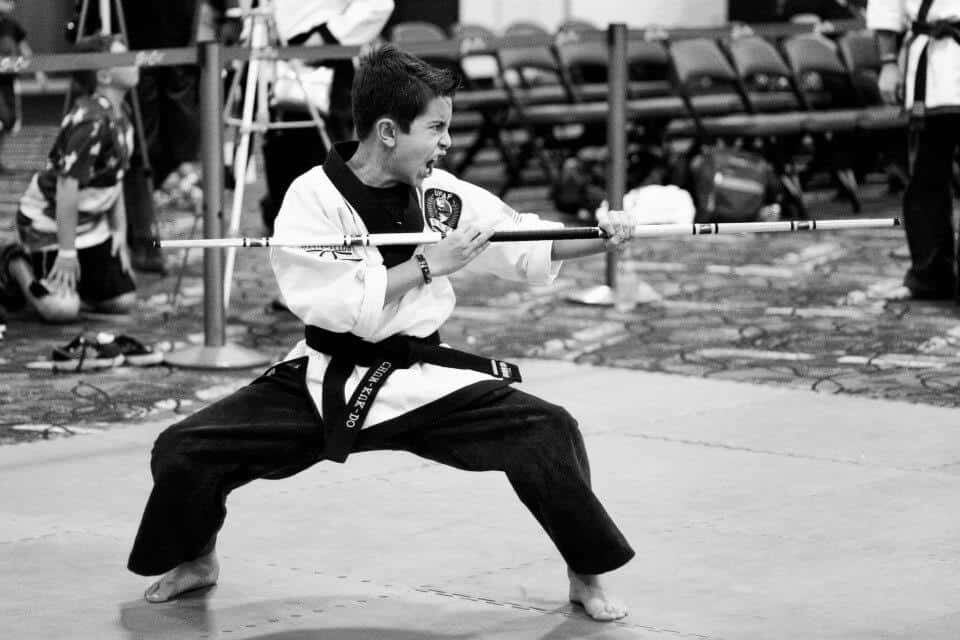 Chun Kuk Do teaches various forms and techniques, as well as the use of several weapons, including a Bō staff.

So that is pretty much the extent of Chuck Norris’ martial arts knowledge, which is very expansive and impressive. Chuck could clearly hold his own in a real fight, especially given his expertise in Brazilian Jiu-Jitsu, which is recognized as one of the most effective martial arts to exist.

So in short, the martial arts that Chuck Norris knows include Tang Soo Do, Judo, Brazilian Jiu-Jitsu, Karate and Taekwondo, holding black belts in each one. He has also studied Hapkido, Kenpo, and Arnis, and has created his own martial art known as Chun Kuk Do.

I hope this post helped you learn about Chuck Norris’ background as a martial artist. If it did, please consider checking out other similar posts on the Fan Questions page. Thanks for reading!

The 11 Most Famous UFC Commentators

What Martial Arts Do Green Berets (US Special Forces) Learn?

Do UFC Fighters Get A Salary?