If you are an Attack on Titan fan, you may remember the training sessions the new recruits had to go through in season 1. Of these training sessions, a standout moment was when Annie shows Eren how to fight during their hand-to-hand combat session. Interestingly enough, Eren successfully uses these new combat skills later in the series (spoilers ahead). In this post, I am going to explain the fighting styles used in Attack on Titan.

In Attack on Titan, Annie primarily uses two martial arts, one being Muay Thai, and the other being Brazilian Jiu-Jitsu. She shows Eren’s skills in both martial arts, skills which he later uses in his Titan form against the Armored Titan with great effectiveness, despite Eren’s disadvantage in size.

As mentioned, Annie primarily uses a Muay Thai style when fighting. This is deduced by first looking at her fighting stance. She stands very upright, with very little weight on her front leg, and her hands held high in front of her. This is the typical Muay Thai stance, and there are many instances of this stance being used in real combat situations. 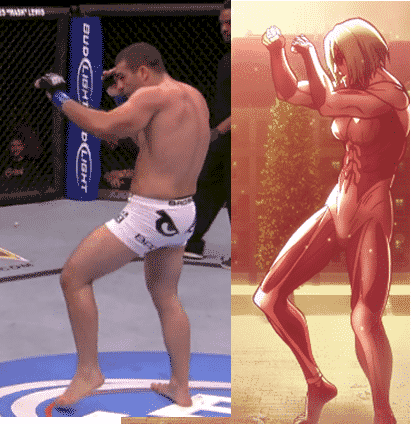 Annie’s stance in her Titan form, compared to former UFC champion Mauricio Rua, who has a similar style.

Apart from her stance, Annie also uses a lot of techniques used in Muay Thai. For one she uses the Muay Thai ‘plum’ which is the name for the clinch when her arms are wrapped around her opponent’s neck. I have a separate post that fully explains the Muay Thai Plum, as well as how to perform it yourself, which you can find here: What Is The Muay Thai Plum?

She also uses trips, notably seen when she trips Eren during their training. And lastly, she uses roundhouse kicks and low kicks, with emphasis on her shins. An interesting thing we see is when she hardens her shins in her Titan Form before striking, something she also does with her elbows.

This hardening of the limbs is seen in real life, although obviously in a different manner. Muay Thai originated in Thailand, and children there fight in competitions at a very young age to make money for their families.

In order to deal and receive kicks with less pain, these competitors harden their shins by kicking banana trees. As they kick down these trees, micro-fractures are created in the bone, which crystallizes and forms harder shin bones. 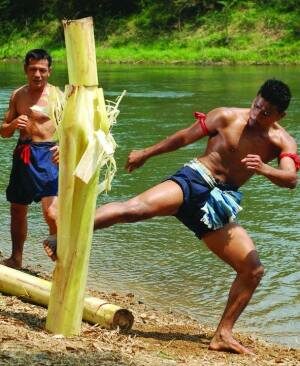 A Thai boxer kicking a banana tree trunk to condition his shins.

As we can see, Annie has all the makings of an expert Muay Thai practitioner. However, it is seen that Annie is also skilled in submissions, as after tripping Eren in the clinch, she holds him down and chokes him using an arm-triangle choke, a move commonly seen in Brazilian Jiu-Jitsu.

Also, it is inferred that pretty much all of Eren’s fighting ability was taught to him by Annie. Eren uses impressive grappling abilities against Reiner when they fight in their respective Titan forms, including a triangle-armbar attempt which transitions to a regular armbar with which Eren breaks Reiners’s arm.

He also attempts a guillotine choke when Reiner goes for a takedown, with which he almost finishes the fight. I have to assume that these grappling skills were all taught to him by Annie in training, meaning Annie is highly skilled in not only Muay Thai, but Jiu-Jitsu as well.

During his fight with the Armored Titan (who we know is Riener at this point), Eren uses a good mix of martial arts knowledge to successfully damage a bigger opponent.

Initially, the fight goes as one might expect, with Reiner throwing powerful punches which send the lighter Eren flying. However, at some point during the fight, the wise Armin reminds Eren that he cannot win in a slugfest.

Instead of retreating as Armin suggests, Eren carefully times Reiner’s punch. As soon as Eren sees the punch coming, he slips under it, secures the clinch, and uses a trip to get Reiner to the ground.

Not surprisingly, a flashback shows that the trip is identical to the one Annie used on Eren in training. 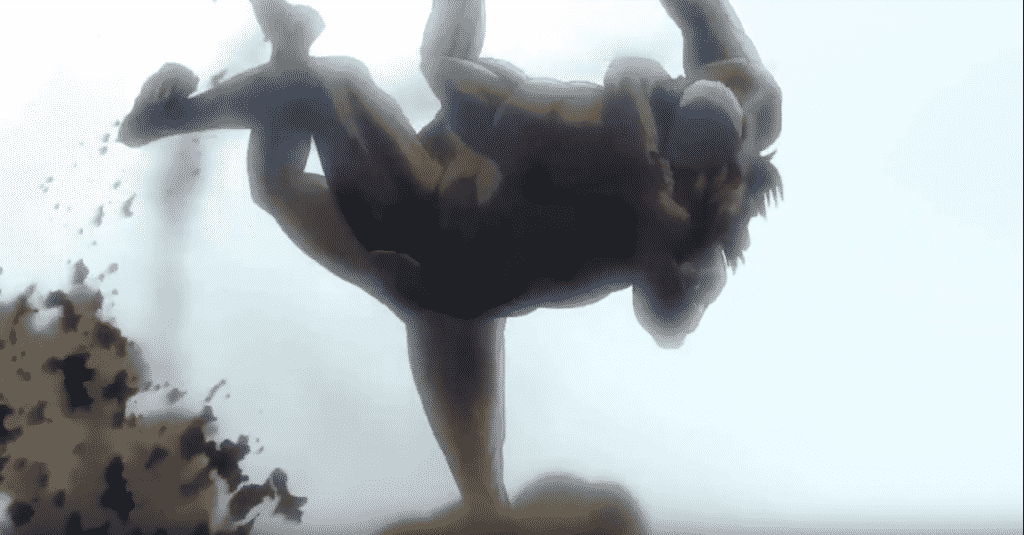 Eren (on one foot) trips Reiner with a move Annie taught him.

At this point, Eren is in full mount. However, Reiner manages to use his strength to throw Eren over. As Reiner is pushing Eren, Eren grabs one of Reiner’s arms and wraps his legs around Reiner’s neck, attempting a triangle-armbar submission.

He cranks it for a few seconds, which notably hurts Reiner. Reiner then starts standing up, perhaps intending to slam Eren.

Eren applies a triangle-armbar on Reiner.

Eren cranks this armbar until he completely tears Reiner’s arm from his body. At this point, Reiner is visibly damaged, and Eren is clearly winning the fight.

Reiner gets up, and charges at Eren, successfully taking Eren down with a double-leg takedown (with one hand no less). Eren finds himself directly under Reiner, with Reiner punching him from the top.

Eren realizes Reiner’s legs are exposed, and he wraps his own legs around one of them, attempting a heel-hook submission. However, nothing happens, because either Eren does not know how to apply the move properly, or it has no effect on Reiner. Eren gives up on the move and instead throws Reiner off of him. 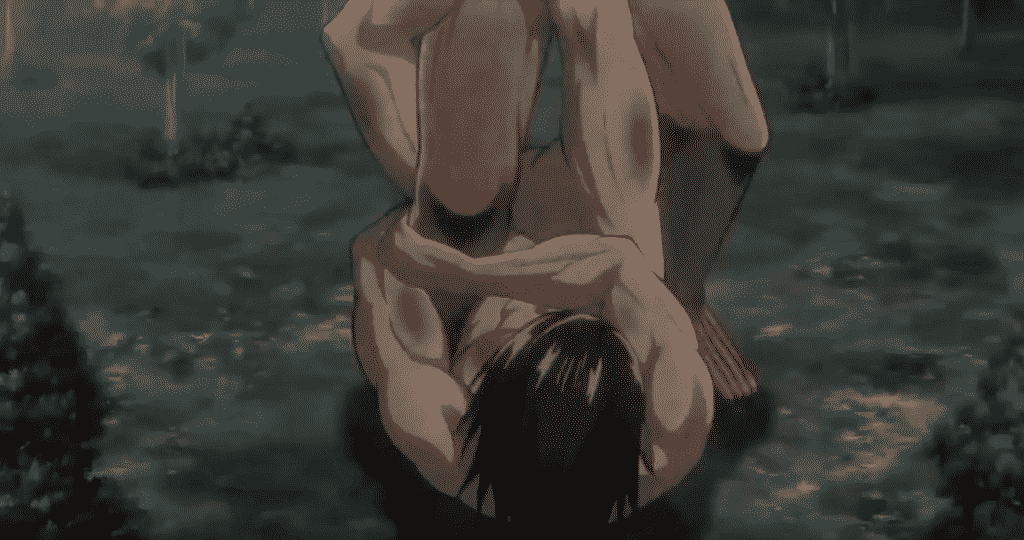 With both Eren and Reiner on their feet, Reiner attempts another takedown. Realizing that he can’t possibly defend the takedown, Eren instead goes for a guillotine choke. He applies it with great success, as Reiner’s bones begin to shatter.

With Mikasa’s help in attacking Reiner’s now-exposed muscles, Eren continues to crank the submission and is about to win the fight. Unfortunately for Eren and his friends, Reiner manages to position himself and Eren directly under Berthholdt’s titan, who falls onto both of them, ending the fight. 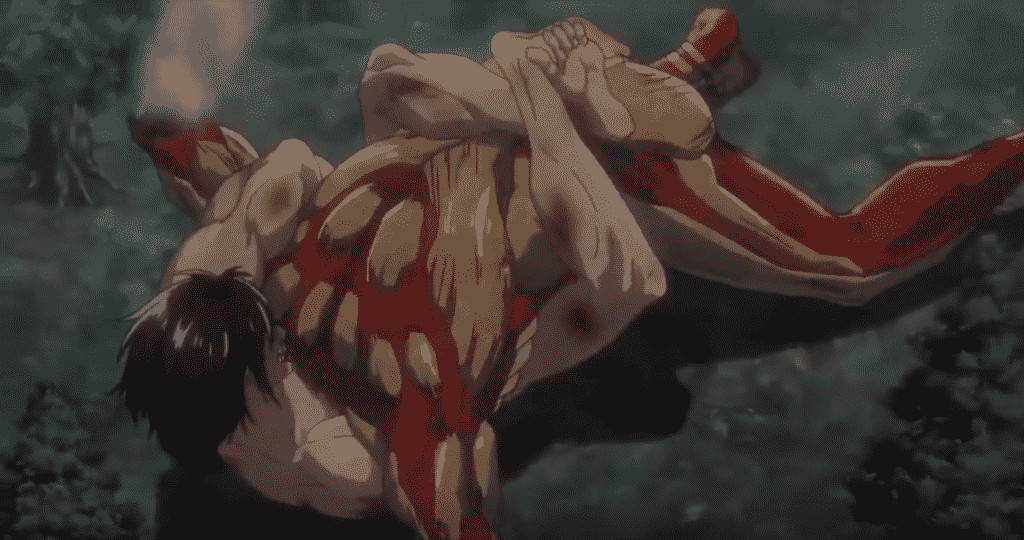 Eren goes for a guillotine choke after Reiner attempts a takedown.

The effectiveness of Eren’s Jiu-Jitsu techniques against the much larger Reiner may be a reference to the first official UFC event. The event was a one-night tournament-style competition, with all fights being held on the same night consecutively. The competition brought in men from various disciplines and styles of fighting, including Boxing, Karate, Sumo, and more.

However, the standout competitor was Jiu-Jitsu practitioner Royce Gracie. Standing at 6’0 and 180 pounds, he was by far the smallest man in the tournament, as the average competitor weighed about 220 pounds, and his opponent in the final match was 6’5 and 214 pounds.

Despite this, Royce managed to defeat every opponent put in front of him that night in dominant fashion, eventually becoming the winner of the very first UFC event. His wins in the early days of the UFC are credited with popularizing Brazilian Jiu-Jitsu worldwide. 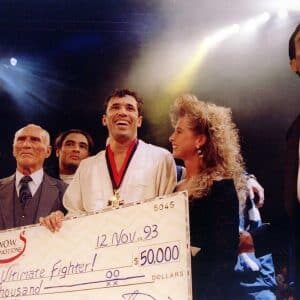 Today, Jiu-Jitsu is regarded as one of the most effective martial arts ever created. It is the ability to quickly and efficiently defeat opponents in any combat situation that has continued to earn its popularity. Jiu-jitsu continues to evolve, with pioneers such as Eddie Bravo creating variations and improvements in technique.

As for Muay Thai, it is also held in high regard within the MMA community. This is due to its effectiveness at dealing damage and crippling opponents through brute force, which is also why I chose it in my post titled What Is The Best Striking Martial Art? It encourages the use of all limbs in striking, including elbows, knees, hands, and feet. For this reason, it is known as ‘the art of eight limbs.

In the martial arts native country of Thailand, May Thai competitions are used to earn money, as the competitors earn considerably more money than they would from regular work. Muay Thai began gaining popularity and credibility as a martial art when its practitioners began competing in kickboxing and mixed rules competitions. Due to its use of knees and elbows, it has become an important aspect in MMA competitions, where these types of strikes are allowed.

There are many noteworthy mixed martial artists that incorporate this striking into their style. One of the better ones is UFC light-heavyweight champion Jon Jones, who uses elbows and knees in a significant amount of striking exchanges.

Muay Thai is also one of the less stringent martial arts when it comes to striking, which also leads to its use in MMA. As mentioned before, it has many more techniques to offer than regular kickboxing or karate ever could. 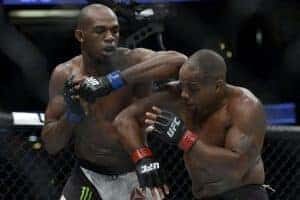 The differentiating technique is perhaps the Thai ‘plum’. As mentioned before, the plum is a clinch position from which one can either knee, elbow, kick, or sweep their opponent. This makes it especially useful when combined with some type of grappling (as we see with Eren and Annie), as the trips and sweeps are used while standing, and a separate grappling martial art can be used to finish on the ground, as was Eren’s case when dealing with the Armored Titan.

All in all, the techniques used in this anime are real and very effective, and I encourage anybody interested in martial arts to take up one of the two mentioned in this post. I have several posts on the Training Tips page that may help you with your martial arts journey. Thanks for reading!

Why Do UFC Fighters Keep Punching After A Knockdown?

The 10 Most Famous Female UFC Fighters

Why Did Muhammad Ali Start Boxing?