As you probably know, UFC fighters must ‘make weight’ in order to be allowed to compete. This means officially weighing in under the limit for that weight class. And although it is unfortunate when a fighter misses weight, I can’t say I’m ever surprised by it.

Of course, there are repercussions to missing weight. In this post, I’m going to answer: What happens when a UFC fighter doesn’t make weight?

When a UFC fighter misses weight, the fighter is fined 20% or 30% of their purse, which is awarded to their opponent. If the fight was a championship fight, then the fighter who missed weight will be ineligible for the title. If a fighter repeatedly misses weight, they may be forced to move up in weight or simply be cut from the UFC.

In the rest of the post, I’m going to cover the full repercussions of missing weight, as well as why it happens.

I already covered the basic punishments that a fighter gets for missing weight, but now I want to talk about it in detail. First, let’s cover the fines a fighter can receive.

When a fighter misses weight, it is customary for the fighter to be fined 20% of his/her purse. The 20% is then awarded to the fighter’s opponent. This percentage has been decided by the UFC in conjunction with the Athletic commission for the state in which the fight takes place.

Kelvin Gastelum (left) was fined 30% of his purse when he missed weight by 10 pounds, in what was supposed to be a 170-pound match, against Tyron Woodley (right).

However, there are cases in which a fighter may be fined 30% instead of the usual 20%. This usually occurs when a fighter misses weight by a significant amount, usually over two pounds. But this decision is made on a case-by-case basis, and has to be decided by both the UFC and the sanctioning body for the fight.

I should also note that non-championship fights have a one-pound weight allowance, meaning that a fighter can be over the weight class limit by one pound, but still be considered on-weight. 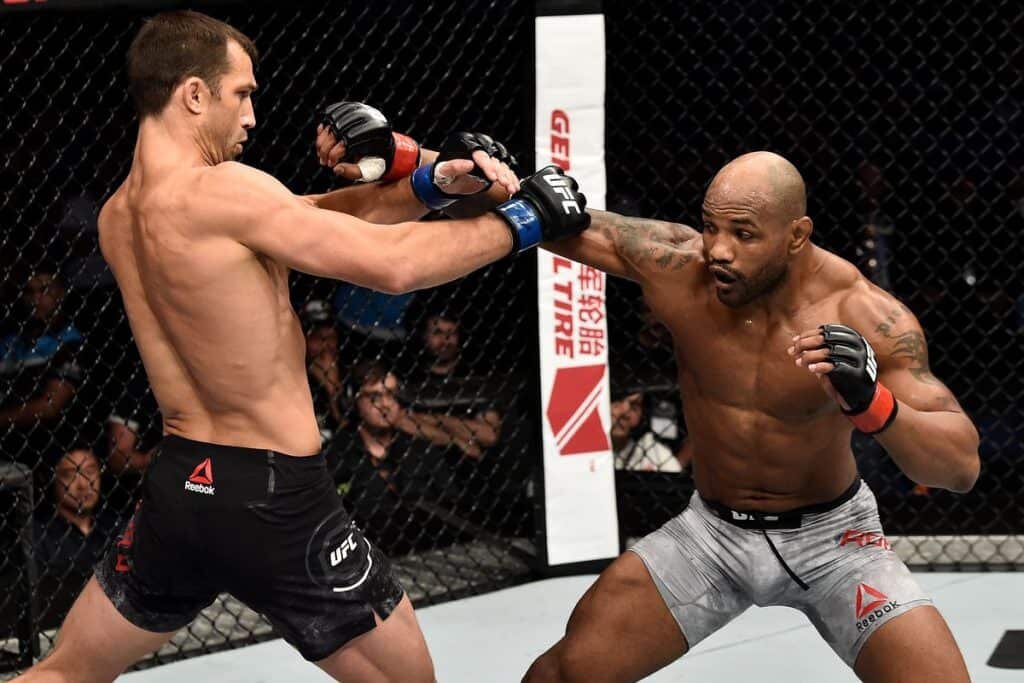 Yoel Romero (right) missed weight for his championship fight against Luke Rockhold (left) by 2.7 pounds. Even though Romero won, he was not awarded the title.

Romero won the fight by third-round knockout. Despite his impressive victory, he did not become the champion, and was fined 30% of his purse.

Ok, so we covered the fines, as well as the eligibilty for championship status. But what about fight bonuses?

Yes, this is something often overlooked when talking about the consequences of missing weight. If you didn’t know, the UFC awards post-fight bonuses to fighters who performed well, with the two bonuses being “Performance of the Night” and “Fight of the Night” (which goes to both fighters).

Fighters who miss weight are ineligible for bonuses. They cannot be awarded “Performance of the Night” at all.

However, “Fight of the Night” (FOTN) is a bit different. The Fight of the Night bonus is usually awarded to the two fighters who put on the best show, each being awarded $50,000 as part of the bonus. So what does this mean when a fighter misses weight? 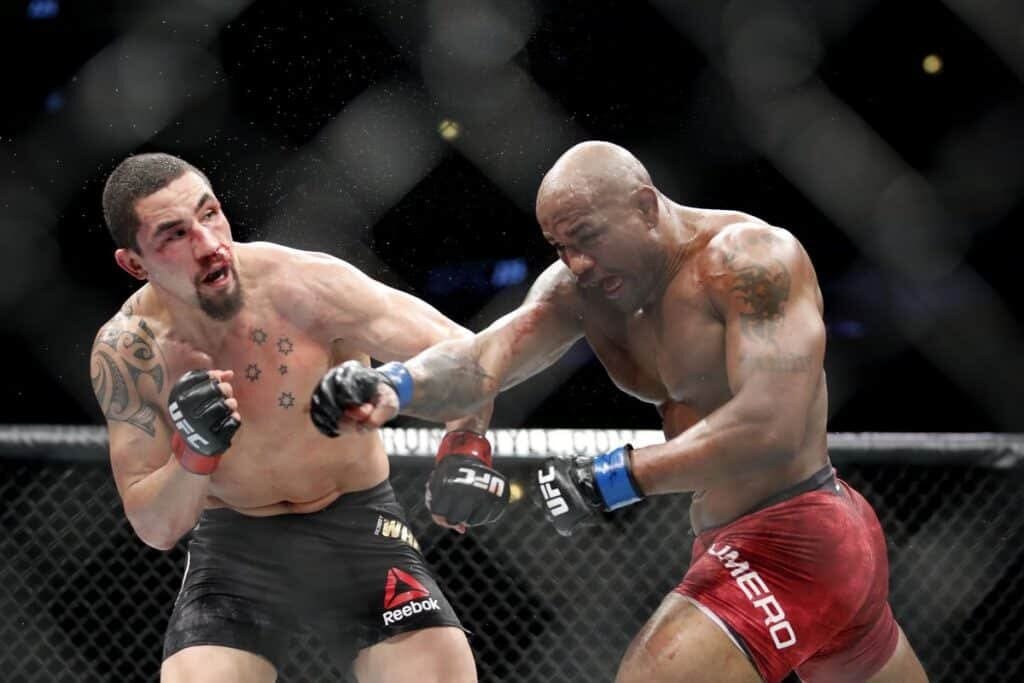 Yoel Romero (right) and Robert Whittaker (left) put on a great show for the fans, winning “Fight of the Night”. Unfortunately for Romero, the bonus that would have gone to him went to Whittaker, because Romero missed weight.

This was the case for Yoel Romero when he missed weight (again) for his fight against Robert Whittaker, for the undisputed Middleweight Championship. Yoel Romero weighed in at 185.2 pounds, literally just 0.2 pounds over the limit, again making him ineligible for the championship.

They had a great back-and-forth fight, pleasing the fans, and being awarded Fight of the Night in the process. Robert Whittaker emerged victorious via unanimous decision. Whittaker received the $50,000 FOTN bonus, as well as Romero’s bonus, due to Romero missing weight.

So we’ve covered all the short-term repercussions for a fighter who misses weight, which include being fined, being ineligible for the title, and forfeiting post-fight bonuses. Now let’s talk about what happens when a fighter constantly misses weight.

What Happens When A Fighter Repeatedly Misses Weight?

There are different consequences when a fighter cannot reliably make weight. There are pretty much only two outcomes: the fighter is either forced to move up a weight class, or they are released from the UFC. Let’s look at what it takes for the UFC to make these decisions.

Forced To Move Up

I’ll start with the act of forcing a fighter to move up in weight, since this is less drastic than cutting a fighter from the promotion. An example of this case was when the UFC forced Kelvin Gastelum to move up to Middleweight (185) after missing weight several times at Welterweight (170). 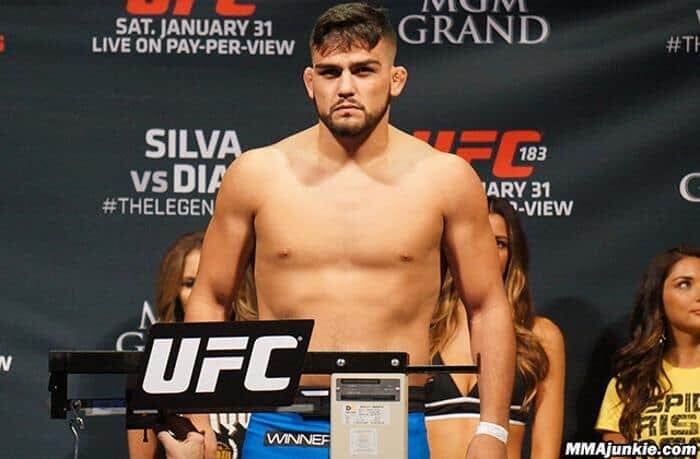 Kelvin Gastelum during his 180-pound weigh-in. He has always had issues making the Welterweight limit.

The first of Gastelum’s weight issues began in his fourth fight for the UFC, for which he missed the 171-pound limit by 1.75 pounds. However the real issue was a few fights later, for his fight against Tyron Woodley.

For his fight against Woodley, Gastelum missed the 171-pound limit by 9 pounds, making it one of the worst weight-misses in UFC history. After this incident, UFC president Dana White ordered Gastelum to move up to Middleweight.

But it doesn’t end there. Gastelum was allowed to return back to Welterweight after getting a win at Middleweight. Unfortunately, a few fights later, he again had weight issues.

This was in the lead up for his fight at UFC 205 against Donald Cerrone at Welterweight. On the day of weigh-ins, Gastelum did not even show up to the weigh-ins, automatically withdrawing the fight from the card. Many people were angry at Gastelum’s decision to not show up, including his opponent, who says he would have still fought against Gastelum despite the weight difference.

The incident prompted the furious Dana White to say “I’ll never let him fight at 170 again”. The UFC forced Gastelum to move up to Middleweight, permanently.

Cut From The UFC

Now let’s talk about a case where the fighter gets cut from the promotion due to their trouble making weight. Such was the case with Anthony “Rumble” Johnson, who most recently competed in the Light-Heavyweight division, prior to retiring.

At the start of his career, Johnson was a Welterweight (170), which is surprising to say considering that he wants to make a return at Heavyweight (265!). Anyways, he had a couple of fights early in his career where he missed weight. They were pretty bad, both by about 6 pounds, but the UFC allowed him to remain at welterweight.

This image shows Anthony Johnson’s drastic increase in size over the years. On the left is him at 170 pounds, while the right shows him at 205 pounds.

Of his own accord, Johnson decided to move up to Middleweight. So it came as a surprise to everyone that for his first weigh-in at Middleweight, Johnson weighed in at 197 pounds, 11 pounds over the limit. Johnson’s failed weigh-in prompted Dana White to say, “This is his third time. Three strikes and you’re gone”. Johnson was subsequently cut from the promotion, after losing the fight.

What Makes The Difference

So what makes the difference between a fighter that gets cut from the UFC and a fighter that is forced to move up? Well, it depends on how Dana White feels about you.

In the case of Kelvin Gastelum, Gastelum had won The Ultimate Fighter series at Middleweight, and had shown potential as a future contender. Because of his potential and his status as a rising prospect, the UFC decided to give him a chance to stay at Middleweight (despite missing weight three times).

Anthony Johnson, on the other hand, was simply not seen as valuable as someone like Gastelum was. Part of the reason may have also been due to Dana White’s fury when considering that: 1) Johnson moved up in weight, 2) Johnson still missed weight, and 3) Johnson lost the fight.

It simply depends on how valuable the fighter is to the UFC. If they are more valuable, then forcing a fighter to move up in weight may be all that is necessary to keep them. If the fighter is less valuable, then their unreliability in making weight is enough to get them cut from the UFC.

In short, a fighter who misses weight is fined 20% or 30% of their purse, which goes to their opponent. Fighters who miss weight are ineligible for championship status or fight bonuses. A fighter who repeatedly misses weight may be forced to move up in weight, and in some cases, they may be cut from the promotion.

If you want to learn more about other commonly-asked questions about MMA, check out the Martial Arts History page. Thanks for reading!

How Many Times a Year Do Professional Boxers Fight?